In spring 2023, DAS MINSK Kunsthaus in Potsdam will present the retrospective Nichts Neues, devoted to the artist Ruth Wolf-Rehfeldt (*1932 in Wurzen) and her artistic life's work between 1960 and 1990. The exhibition examines Wolf-Rehfeldt's typewritings, print graphics, collages, and paintings in three thematic episodes that open new perspectives on the artist's oeuvre.

The first episode, “Many Open Questions,” is dedicated to tracing and overcoming physical, cognitive, and systemic boundaries. “Whether Nature Overreached Itself When It Took on Mankind” is the point of departure for the second episode. Topics like environmental destruction, environmentalism, and the relation between human and nature appear repeatedly in the artist's work. Wolf-Rehfeldt intensively dealt with socially relevant topics such as information technology, feminism, interhuman relations, and the effects of the Cold War. The final episode asks the question “Where Do You Stand?” and invites viewers to reflect upon their own perspectives and beliefs.

Wolf-Rehfeldt began to write her first poems in the early 1960s and created pastels, drawings, and paintings as a self-taught artist. Her typewriter graphics, which she calls “typewritings,” were preceded by a long-term and intensive exploration of image, script, and language. Ruth Wolf-Rehfeldt's first typewritings were created in 1972. The typewriter became her artistic means of production. She experimented with the image formation of language and laid the foundation for her concrete poetry. In a manuscript entitled Signs Fiction, the artist explained how for her, pre-existing signs became the building blocks of fictive signs by conferring words and alphabetic symbols with new meaning. The qualities of the alphabet became material for her visual compositions. Wolf-Rehfeldt thereby used signs beyond their linguistic meaning and in her typewritings gradually developed her own formal language.

Ruth Wolf-Rehfeldt was engaged with a vast network of international artists known as the Mail Art movement. She and her partner, Robert Rehfeldt, were pioneers within the GDR of a type of artistic exchange that allowed for the uncensored circulation of art and ideas. After the fall of the Berlin Wall, Wolf-Rehfeldt stopped making work altogether. Her newly found geographical freedom had fundamentally altered the function of making and distributing art.

The exhibition is curated by Paola Malavassi and Marie Gerbaulet. 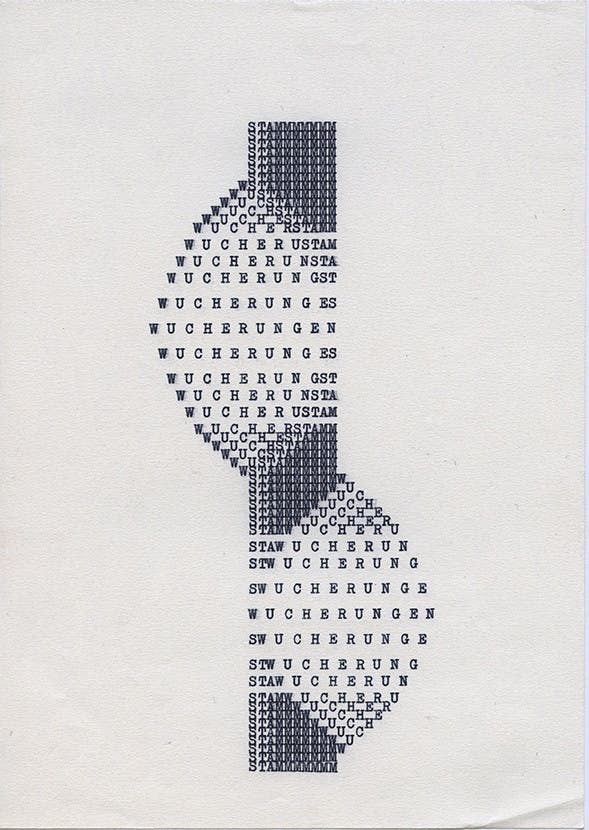 All highlights in our newsletter